"Our past is our strength, and our future is uncertain unless we have our roots in our traditions. I believe that we need to follow the path given to us by the Holy People and try to raise our children in similar ways"  Ruth Roessel 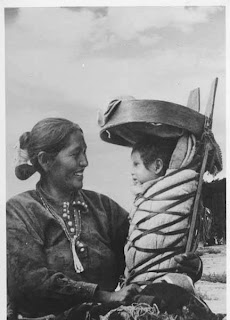 The more midwives I meet and interact with, the more I realize how different we all are.  Different reasons for becoming midwives, different perspectives on women's health, and different ways of communicating.....  The point I always try to get across to them is, when caring for Native American women, some things you are going to say and think are not going to be okay.  The general context of women's liberation veiws are not going to make sense to us and will come across as foreign and you might as well be speaking a different language.  Some call this cultural sensitivity and hospitals may think they are able to train individuals to be sensitive to different cultural beliefs, however the big question of "WHY," is never really explained well.  Reading about our high birth rates and how sexually transmitted infections run rampant on our reservations might lead one to think that Native American women don't take their reproductive health seriously, but it's quite the contrary.  It is taken very seriously, but not in the way you think.

Our history during the time of women's liberation through contraception is quite different.  Looking through the eye's of health policy, Native American's receive the majority of their care through Indian Health Services. Which means, any health policy put through legislation is going to affect us the most.  Furthermore, prior to the 1980's there was a silent war being waged over our wombs as a way to get rid of us all together.  You may have heard this, but I'm going to say it again.  Native American's are one of the most highly regulated populations in the United States.  If the majority of our healthcare is at the disposal of the federal policies, "choice" and "options" are two words we are not used to hearing. What has been an issue is "access."  We have access to healthcare and contraception through Indian Health Services, but at the discretion of federal policies and IHS healthcare providers. 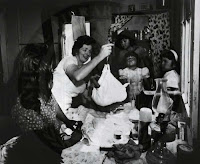 Since the 19th century Native American's or Indigenous tribes have been viewed as "wards of the government to be shaped and assimilated." The United States policies sought to transform Indians from "Children of nature into children of the state," so that a new generation of savages would not be born.  The governments first attempt at full-filling the role of parent to Native American children was through boarding schools.  The first Indian boarding school was in 1879 in Carlisle, Pennsylvania.  It is here that Indian children were beaten and scrutinized for speaking their native languages.  Indian families were threatened and intimidated into sending their children to boarding schools.  Later in the early 20th century, the Indian Bureau sought to intervene in the care of school age children through the use of "field matrons," white females educated in the art of "scientific motherhood."  In 1916, they linked the high number of infant deaths to unassimilated Indian mothers, and sought to re-educate them in the "proper" way to raise their children.  This was called the "Save the Babies" campaign, which used baby shows to instruct mothers in how to properly dress and care for their children.  They were advised to look to field matrons and physicians, NOT extended family networks for education and assistance.  In 1958, the Bureau of Indian Affairs started the Indian Adoption Project, which was aimed at promoting foster care and adoption of Indian children to non-Indian families.  Which brings us to the late 1960's where the idea of federally funded sterilizations for poor women of color was recommended as a means to control over population.  In 1968, a commission on population and family planning recommended federally funding sterilizations.  It was also during this time Feminists at Planned Parenthood made subsidized birth control one of their national lobbying priorities.  It is here that health policy was at a turning point, because suddenly women wanted reproductive freedom. 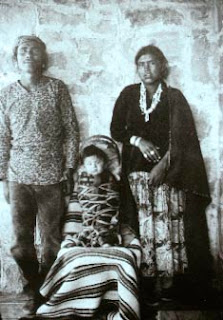 In the 1970's,  the Family Planning Act was what allowed for federal funds to be allocated for the purpose of paying for hysterectomies, tubal ligations, and vasectomies.  So what was viewed as reproductive freedom from a feminist perspective, felt more like federal policies attack on Native American tribes, as a means to prevent Indian childbearing.  Believe it or not, during the 1970s American Indian's had a movement where any form of contraception was rejected and it was their job to have more babies to keep tribes thriving.  This was viewed as "building stronger Indian Nations."  It wasn't long after the Family Planning Act was passed that coerced sterilizations started to take place in IHS.  Despite the policies request for consent prior to sterilization, coercions still took place.  Women were lied to about the need for hysterectomies or told they would still be able to have children after the surgery.  One study I read reported that on the Navajo reservation during the 1970's, sterilizations increased from  15.1% in 1972 to 30.7% in 1978.  Once coerced sterilizations within the Indian Health Services was identified, during an audit of records, it was found that 23 sterilization's performed between July 1 1973 and April 30, 1974, were to women under the age of 21.  It is unfortunate that these events had to occur for there to be more stringent consent procedures within the Indian Health Services, however it is events like these that lead to more human and ethical health policies.

It is interesting now,  to see how we have come full circle and are still dealing with reproductive health issues, equality, and trust.  I wanted to write about this issue because I think it is important for healthcare providers to realize that the women they care for,  all have a different cultural perspective on their own reproductive health.  It may not be a positive one and it may not even include women's liberational views on contraceptive freedom, but rather as a means of trying to build a stronger Native American Nation.  Having a baby at 15 may not be a detrimental event nor is having 10 children.  Supporting women and their choices is our work at hand and doing it in a way that supports their social structures is vital to their health.  We may have many ideas of what is the right path for the women we care for, but in the end it is their decision.  What might be right today, could be completely wrong tomorrow.

Here is something to think about, health policies put into motion way back in the 19th century may have had the illusion of impacting maternal fetal outcomes on our reservations for the better good of our tribes, but our numbers tell a different story.  According to the NM State Health report in 2011, Native American women still have the highest number of unintended pregnancies (48.8%) as compared to Hispanic and White women, the highest number of pregnancies not seeking early prenatal care (26.5%), and high infant mortality rates (7.6%/1,000 births, from 2000 to 2009).  Native American women today now are even more acculturated then 30 yrs. ago.  So why aren't our health statistics vastly improving?

To read about some of our history here are some links: