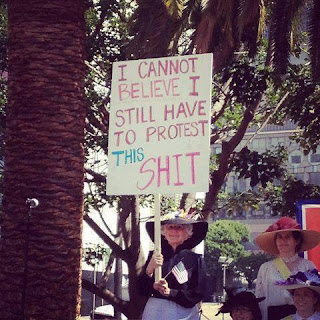 I've really given this a lot of thought.  When I made the choice to become a midwife, one of the first things my mother-in-law asked me was whether or not I was allowed to do abortions.  At the time, I'd never really thought about it.  I have always been a supporter of women's rights, but suddenly I was faced with this personal question.  It also gave me insight into what little she new about midwifery.  What struck me most was..."really this is all you care about and want to know about the wonderful world of midwifery?"  I told her, "no I would not be doing abortions."  As I went through the midwifery program, she asked little about my work.  One day while sitting around the dinner table with my sister-in-law and mother-in-law, they began to discuss their disgust with Planned Parenthood and New Mexico's history of late-term abortions...I held my tongue.  Obviously, my way of thinking and support of women's rights was not going to be welcomed at this table.  However, even though I kept quite for the most part, I did add a few bits of information at times, like how women could get low cost women's health care at Planned Parenthood.
This very conversation prompted a discussion between my husband and I.  Would I perform an abortion?   I dug deep into my Navajo teachings and came to the conclusion that my role as a midwife is here to support life. If you know anything about the Navajo way of life, we are not suppose to be around death.  Furthermore, thinking back to all the prayers done on my behalf, why would I chose to tempt what was done for me?  I also thought that those chosen to do this work of performing abortions have a role here on earth as well.  I thought of our life cycle and all the many unexplainable things that happen here.  Despite my personal beliefs, I strongly stand with women who have to make the hardest decision of their lives to terminate a pregnancy. I understand that each woman has her own set of unique unexplainable circumstances.
Recently...I was horrified to hear that an amazing physician and birth center was made the target of an out-of-state anti-aborition organization.  This group called the "Survivors of the Abortion Holocaust" went to his home and terrorized his family.  The funny thing is, they call this "peaceful picketing"..I don't know about you, but when is it peaceful for a mop of protesters to come to your home, show pictures of dead babies, and shout "baby killer?"  They also went to a birth center in Albuquerque and did the same thing while a woman was in labor. What was suppose to be a peaceful birth, turned into something else.  I did think for a second..perhaps I could post pictures of their faces on signs and show dead Native American's and call them out in being part of thousands of deaths in Indian Country due to their pre- and post colonial ways?...I could call it "Survivors of Columbus".......Anyway, you get my point......... This organization is also pushing a 20 week Abortion ban ordinance in Albuquerque.  What most people don't know about late term abortions is this...they have a medical indication.  Meaning after the 20 week anatomy ultrasound, they found the baby could not survive outside of the womb.  Meaning they were missing vital organs for survival.  My thoughts are this, how can we even think of making a woman carry a baby to 40 weeks knowing it will not survive outside the womb? This in itself tells me, women are still not valued, we are still viewed by some just as a vessel for childbirth.
The other issue I have with this way of getting their message across and who is supporting this ordinance is it is completely religiously motivated.  It get's me thinking back to all the things done to Native American women over the last century that have been all for the call of "RELIGION." Our wombs have been subjected to Catholicism, government dictatorship and assimilation. So even though my personal beliefs about abortion...are my personal beliefs on abortion, I am familiar with this war being waged over our wombs.  It is this very reason why we as Native American women should stand together to support a woman's right to her own body. 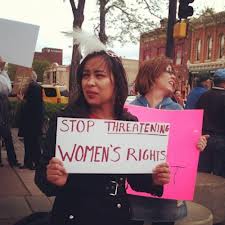 I resent the scare tactics currently being used to propagate an audience, while using the faces of  respected women's health providers as targets.  While thinking about writing this blog, I even considered the ramifications for writing a HONEST response to what is going on in Albuquerque.  I think those very thoughts are what an organization like theirs hopes to instill in the women of New Mexico....FEAR... I hope that if they do decide to come protesting on my lawn because of my support of a women's right to her own body, that my Native brothers and sisters would see them for what they are, but would also meet them at the gate in numbers larger then they have ever seen.  We are not just one, we are many.  I am also aware that I may lose some readers because of this honest, post, as that my beliefs do not align with yours...and yes I make it a point to speak up about things more spiritual, however this has waded heavy on my mind all week....and if you haven't noticed, I'm terrible at being silent.